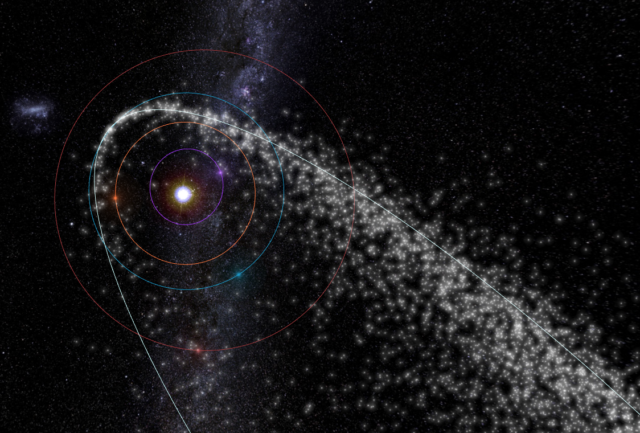 From about July 14 through August 24, Earth is orbiting through the debris left behind by Comet Swift- Tuttle. The particles of debris are small, like grains of sand and usually no bigger than a pea. When they encounter our atmosphere at 59 kilometers per second, friction causes these tiny bits to heat up. They glow bright like a shooting star and sometimes leave smoke trails. Larger pieces can break up into smaller ones, so you just never know what you’ll see!

The best way to view a meteor shower is to first pick a safe, dark location, away from any lights and with a clear view of the sky above. The Perseid meteor shower is considered the best one of the year because of the high meteor count. They often leave long trails. Even so, you must be patient. You could wait ten minutes and not see one and then all of a sudden, zzzzipp one streaks across the sky and then another. That is part of the excitement.

Watching the meteor shower with others is always fun. It is a good idea to have an extra layer of clothing in case it gets cool and insect repellent may be in order, although not so much in the pre-dawn hours. Some sources will tell you to face the shower radiant, the constellation Perseus, seen in the east, after midnight. In my experience, I have found that laying down or reclining, so that you can look straight up, is usually best.

Another tip is to get outside during the wee early morning hours after midnight. Think of Earth as a car flying on a celestial highway. When you look up during those wee hours you are beginning to look in the same direction that Earth is traveling …looking out the front windshield. You are facing forward and that equals more meteors …no different than catching bugs on your car’s windshield.

This year, the best chances for seeing meteors will be late Tuesday evening, especially after midnight on Wednesday, August 12. The waning Moon will make seeing the faintest meteors difficult, but don’t despair. There will be plenty of show stoppers! All you have to do now is be ready with your list of wishes!

PS Clicking on the image above takes you to a fun, interactive animation, that shows the orbiting debris trail and how Earth passes through it. You can play around with your point of view and zoom in and out to really understand how a meteor shower works. Credits: Meteor data from Peter Jenniskens, visualization developed by Ian Webster at metorshowers.org

PS And another fun link to NASA’s What’s Up